The ability to create beings of earth/rock or shape it into certain shapes. Sub-power of Earth Attacks and Terrakinetic Constructs. Variation of Elemental Entity Creation.

User is able to create beings of earth/rock or shape existing earth/rock into wanted shapes and purposes. They can grant the beings varying levels of independence (controlled, automatons/programmed, semi-independent) and existence (momentary to permanent) and delete the creature once they are done with them.

Kū (Boruto: Naruto Next Generations) can create unlimited numbers of Akuta as a living weapons with limited lifespan and intelligence.

Charmcaster (Ben 10) with her rock monsters.

After evolving into Boboiboy Earthquake (Boboiboy), Boboiboy has the ability to control his earth golem.

An Iwagakure kunoichi (Naruto) creating an Earth and Stone Dragon. 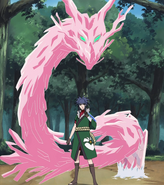 Creature made out of earth.
Add a photo to this gallery
Retrieved from "https://powerlisting.fandom.com/wiki/Geokinetic_Creature_Creation?oldid=1694558"
Community content is available under CC-BY-SA unless otherwise noted.