Vision (Marvel Cinematic Universe) possesses an artificial intelligence composed of fragments of Ultron's replicated mind and what was left of J.A.R.V.I.S.

Possess a mind made up of other minds.

The ability to possess a mind made up of other minds. Sub-power of Amalgamation and Mind Hive. Not to be confused with Divided Mind.

The user possesses a mind that was made from/composed of two or more other minds. This could include fragments of multiple, incomplete minds woven into a single, functioning mind or multiple, whole minds made into one.

While Gillian-type Hollows (Bleach) are mostly mindless as the numerous personalities inside of them constantly fight for control...

...One of its minds can subdue the others and take complete control over the body, thereby become a far stronger and smarter Adjuchas-type Hollow.

Lex Luthor and Brianiac (DC Comics) agreed to fuse together to truly become one, so Brainiac will not have any trust issues with Lex's otherwise cunning mind, and Luthor would be able to contribute his creativity to expand Brianiac's narrow goals.

Apocalymon (Digimon) is the combined embodiment of all Digimon that have failed to evolve and died out.

Gotenks (Dragon Ball Z) is the fusion of Son Goten and Trunks, and this combines their personalities into a new mind for the 30 minute duration.

Vegito (Dragon Ball Z) is the fusion of Son Goku and Vegeta via the Potora earrings, which normally has the stronger one as the dominant personality, though because the two are equal, they essentially formed a new mind.

As a Metamoran Fusion, Gogeta (Dragon Ball Series) is an equal combination of his fusees personalities.

Jasdevi (D.Gray-Man) is the fusion of Jasdero and Devit, and their two minds effectively become one when merged.

Mod-Soul Ōko Yushima (Bleach) is the fusion of Kagerōza Inaba and Nozomi Kujō, and though their minds effectively returned to being of the original Ōko Yushima, Nozomi's would rise from time-to-time to resist. 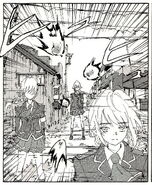 Setsuna Itami (Coppelion) had her genetic memory of the original Setsuna awaken, and the clone's and original's started to merge eventually, becoming a mixture of sorts.

Shiro and Wretched Egg's (Deadman Wonderland) started to merge around the end, and the Wretched Egg eventually ceased to exist as a separate individual.

Suikotsu's (InuYasha) two divided minds started to merge around the time of his second death, becoming a cold-blooded murder who cannot harm children.

Bruce Banner (Marvel Cinematic Universe) spent eighteen months in a gamma lab to fuse the minds of himself and the Hulk into one, combining the Hulk's raw strength and physique with Banner's mind and intelligence. 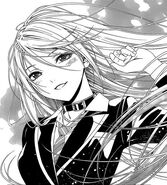 After the destruction of her rosary, Moka Akashiya's (Rosario + Vampire) Inner and Outer personalities became a single mind, a change signified by the tips of Inner Moka's silver hair turning pink.

Because she is a fully stable gem-fusion that stays fused 24/7, Garnet (Steven Universe) possesses a stable personality all her own. 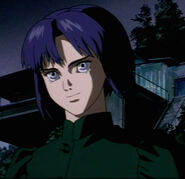 Motoko Kusanagi (Ghost in the Shell) possesses a "ghost" - her consciousness - that was a merging of her own and that of the sentient AI program Project 2501 AKA "The Puppet Master". 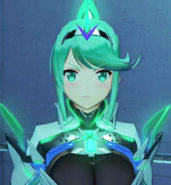 Pneuma (Xenoblade Chronicles 2) is the combined true form of Pyra and Mythra, merging both of their personalities into one.
Add a photo to this gallery

Lex Luthor and Brainiac finally become one - Justice League Unlimited
Add a photo to this gallery
Retrieved from "https://powerlisting.fandom.com/wiki/Gestalt_Mind?oldid=1691004"
Community content is available under CC-BY-SA unless otherwise noted.