Ghouls (Tokyo Ghoul) are a humanoid species that can only feed on human flesh or that of other ghouls.

Use the traits of ghouls.

"A ghoul, as I'm sure you know, is a disgusting creature who opens graves and feeds on corpses."
― Baron Sardonicus

The power to use the abilities of ghouls. Variation of Anthropophagist Monster Physiology.

User with this ability either is or can transform into an ghoul (literally: to seize) a cannibalistic monster that feeds on corpses and living flesh, abducts young children to eat and lures unwary people into abandoned places, often classified as undead. These creatures usually dwell in graveyards and cemeteries.

Ghouls are one of the least consistently portrayed creatures in fiction, partly because the phrases "ghoul" and "ghoulish" are poorly defined terms that can refer to anything or anybody interested in the macabre and morbid, giving writers the ability to name almost any cannibalistic, flesh-eating or just creepy monster after them. As time marched on, Ghouls have become the poster-child to give spawn to other flesh-hungry offshoots, such as the Zombies, Wendigoes, and also the Vampires.

Besides being creatures associated with death, cannibalism, and degeneracy, ghouls (as monsters) can come in a plethora of types and subtypes. Some of the more common varieties include:

See Also: Our Ghouls Are Creepier.

The Dead Onez (Chaos! Comics) in the evil one's thrall are a unique breed of ghoul who retain the personas of their past selves. Able to think and plan in conjunction with their masters own designs. 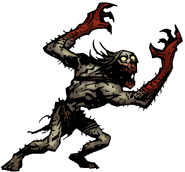 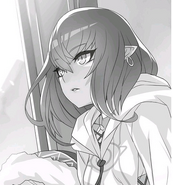 Ghouls (The Death Mage Who Doesn’t Want a Fourth Time) are semi-Undead monsters, said to be born from the【True Ancestor】 vampire, and differ depending on their gender. Zadiris being a female example...

...and Vigaro being a male example.

From the depths of the Earth... (Pathfinder) 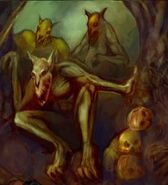 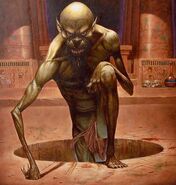 Add a photo to this gallery
Retrieved from "https://powerlisting.fandom.com/wiki/Ghoul_Physiology?oldid=1655050"
Community content is available under CC-BY-SA unless otherwise noted.