The power to become a Giant Lord. Advanced variation of Giant Physiology.

Users of this ability can gain the traits of Giant Lord, Giants who have proved themselves powerful enough to command many other Giants but not quite reached the godlike levels required to be truly Transcendent - good examples would be Giant Kings, Chiefs, Queen or other high-ranking figures, the elite of Giant society, due to Giants often being warlike only the strongest of Giants tend to rule, though sometimes they may be in charge due to being smarter than the others. Most Giant Lords are ruthless in keeping command and will not tolerate attempts to usurp their power, though they may bow down to the sheer might of gods and similar beings. 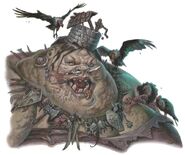 Guh (Dungeons & Dragons) - ruler of the Hill Giants
Add a photo to this gallery
Retrieved from "https://powerlisting.fandom.com/wiki/Giant_Lord_Physiology?oldid=1667735"
Community content is available under CC-BY-SA unless otherwise noted.