Master any and all giant weaponry.

"It was too big to be called a sword. Massive, thick, heavy, and far too rough. Indeed, it was a heap of raw iron."
― Narrator describing Dragon Slayer (Berserk)

"I got a big ass sword and I'm more than willin' to use it."
― Kenta Daisuke (No Need For Bushido)

The ability to understand and use any and all giant weapons with the proficiency of a master. Sub-power of Weapon Proficiency.

The users are masters in the use of weapons that are notably, sometimes massively so, larger than the normal size for the user's size. This gives the user better striking power, a wider range of attack and destructive force.

Due to having his body infused with nanites, Rex Salazar (Generator Rex) is able to use them to create his Big Fat Sword
Add a photo to this gallery 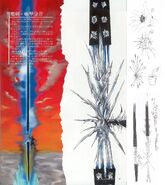 Maloney Oni (Bobobo-bo Bo-bobo) can create a giant sword and thrust it at the enemy.

Having been training with them since he was a child, Guts (Berserk) is extremely proficient in wielding oversized swords....

...with incredible prowess, wielding the slabsword as if its a part of him.

Kenpachi Zaraki (Bleach) releasing his Zanpakuto, Nozarashi, which becomes a gigantic axe that can slice a meteor to pieces.

Winters Socalo (D.Gray-man) wielding his Madness weapon, a giant double-bladed weapon he can spin and throw.

Kotori Itsuka (Date A Live) wielding her giant halberd, Camael, which can be dismantled into the cannon, Megiddo.

Yatogami Tohka (Date A Live) about to use Halvanhelev which can destroy a city and the mountains behind it with a single swing at full power.

Seras Victoria (Hellsing) firing the Harkonnen, a massive anti-tank rifle, over the shoulder like a sniper rifle.

Inuyasha (InuYasha) armed with the giant fang sword of his father, the Tessaiga. 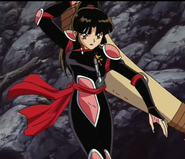 Sango (InuYasha) wielding the giant boomerang, Hiraikotsu, both for throwing and melee.

...with incredibly gentle and subtle movements... 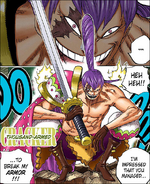 Thousand Arms, Charlotte Cracker (One Piece) effortlessly wields his one of a kind huge longsword Pretzel which can even bypass and cut through Monkey D. Luffy's Gear Fourth's Armament/Busoshoku and cut his arm.

Despite his stature compared to the Gigantion Autobot, Metroplex, Optimus Prime (Transformers: Cybertron) is able wield his colossal axe, the Sparkdrinker.

Whenever the need called for it, Omega Prime (Transformers: Robots in Disguise) can utilize the full energy of the Matrix of Leadership, and shape it into the powerful Matrix Blade.

Bui (Yu Yu Hakusho) wielding a very large battleaxe with tremendous force that is capable of splattering his victims into pieces. 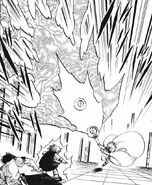 Zeno's (Zatch Bell!) spell, Swordo Zakeruga, allows him to create a giant sword of lightning that is able to harm Zatch even with Rauzaruk active. 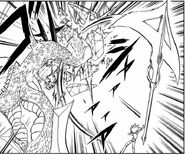 Clear Note (Zatch Bell!) can create giant weapons made of destructive energy and wield them with remarkable proficiency.

When Mr. Hook (Marchen Awakens Romance) activates his Weapon ÄRM, Anger Anchor, a giant anchor is dropped on his enemy. 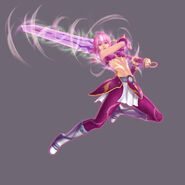 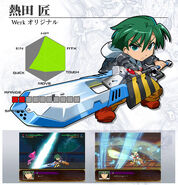 Takumi Atsuta (Battle Moon Wars) wields the high-tech Futsuno. With it, he is able to deliver strikes powerful enough to, as he claims, even "cut gods". He can also activate the weapon's Ignition Release mode to increase its power. 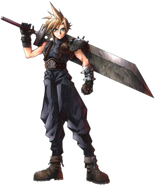 War (Darksiders) always carries his immensely powerful Chaos Eater in the never-ending war between the kingdoms of Heaven and Hell.

Throught his life, Kratos (God of War series) wielded a wide variety of weapons, notably large and powerful ones such as the Blade of Olympus. 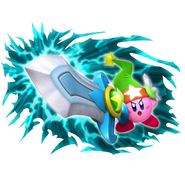 Whenever Kirby (Kirby series) inhales a Super Blade Knight, he gains the ability of the Ultra Sword. 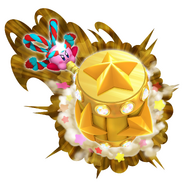 Whenever Kirby (Kirby series) inhales a Super Bonkers, he gains the ability of the Grand Hammer. 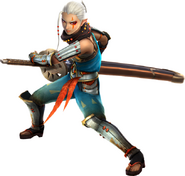 Impa (The Legend of Zelda: Hyrule Warriors) is able to wield the Giant's Knife with speed and strength great enough to dispatch an entire hoard of enemies and powerful opponents.

...can use Rollers, which are far larger than your typical paint roller or paint brush... 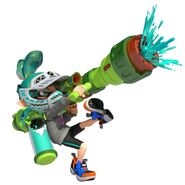 ...and the Inkzooka, which is far larger than your typical bazooka, with proficiency.

Agent 3 (Splatoon) can use the Inkzooka and one Roller weapon... 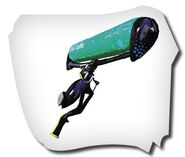 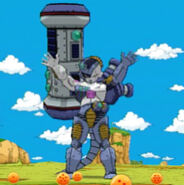 Coco Adel (RWBY) easily wielding a massive gatling gun with her bare hands.
Add a photo to this gallery
Retrieved from "https://powerlisting.fandom.com/wiki/Giant_Weapon_Proficiency?oldid=1417053"
Community content is available under CC-BY-SA unless otherwise noted.