Use the traits of a Glaistig.

The power to use the abilities of a Glaistig. Variation of Mythic Physiology and Fairy Physiology.

The user with this ability either is or can transform into an Glaistig (gaelic lit. water imp), a solitary supernatural being of the Scottish Highlands, with the upper half of a woman and the lower half of a goat, although she was also believed to appear as beautiful female, a goat-like hag or a small woman dressed in green. She has pale (often grey) skin, long golden hair and like many of the fairy races she often dressed in green, long flowing robe, which covered her goat half.

She frequented the lonely lochs and rivers in the Highlands of Scotland, and is sometimes describes as a half earth, half water sprite.

The glaistig is an ambivalent being that appears in legend as both benevolent and malevolent towards humans. In one aspect she even takes the role of the Banshee, wailing at the death of important people, luring men to her lair via either song or dance, where she would then drink their blood, or throwing stones and leading travellers astray from their paths. In her gentler role she was seen as a mischievous friend to children and elderly, and in older stories she was even trusted to play with children while their mothers were milking the cows.

The Glaistig was also closely linked to cattle, and in some forms is seen as a herder of domestic cattle, and of wild deer. 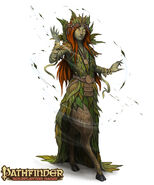 Queen Gendowyn (Pathfinder) ruled the fey Accressiel court in the Fangwood.
Add a photo to this gallery
Retrieved from "https://powerlisting.fandom.com/wiki/Glaistig_Physiology?oldid=1771640"
Community content is available under CC-BY-SA unless otherwise noted.