Vanellope Von Schweetz (Wreck-It Ralph) is a videogame character who is glitchy, which allows her to manipulate the game's coding to do impossible tasks like teleporting.

Glitch in the real world.

The power to glitch in the real or virtual world. Sub-power of Malfunction Manipulation and Video Game Physics. Variation of Rule Bending.

The user can glitch in the real world, which allows them to perform short-lived faults common in video games and operative systems that affect technology. 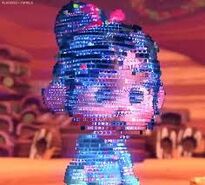 Glitches (Glitch Techs) are video game monsters that cause games to glitch and can enter the real world through their respective games.

Alastor (Hazbin Hotel) casually glitches the audiences screen, as he can cause glitches in reality.
Add a photo to this gallery

Killgore - Cyanide & Happiness Shorts
Add a photo to this gallery
Retrieved from "https://powerlisting.fandom.com/wiki/Glitching?oldid=1704469"
Community content is available under CC-BY-SA unless otherwise noted.