Makabusog (Indio) is the God of Gluttony and can induce others into committing gluttonous behavior using their own Greed.

Induce gluttony in others.

The power to induce excessive eating/gluttony. Sub-power of Gluttony Manipulation. Variation of Vice Inducement. Opposite to Temperance Inducement.

User can induce hunger and extremes of gluttony in others such as over-indulgence and over-consumption of food, drink, or wealth items to the point of extravagance or waste. Victim is unable to focus into anything else than fulfilling their hunger.

Some users are able to grant those affected by this power ability to consume and gain sustenance from anything, not just the edible things.

Larcade Dragneel (Fairy Tail) uses his Famished Soul to induce unimaginable hunger to anyone where they even each their own comrades, even if they get out of hunger state, they become too weak to fight. 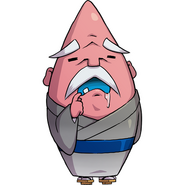