Gene (God Hand) was granted one of the God Hands by clan member Olivia after having his original one severed while protecting her.

The power to have a hand or arm which grants the power of a deity. Sub-power of Transcendent Physiology , Divine Empowerment and God Mode. Variation of Selective Limb Empowerment and Ersatz Body Part. Opposite to Devil Hand.

The user's hand is imbued with the power of a god, and is thus granted incredible power by that god. For instance, if one were to have the power of Kratos, the Greek God of Strength, one might have unlimited strength through that particular hand. Or, if the user represented the Christian God, they might be Omnipotent. Regardless, their power would be channeled through that arm or hand. The power granted depends on the deity which the user represents. In God Hand, it is said that the user of the God Hand possesses the power to "become a god or a demon", a metaphor for the choice between good and evil.

Gene (God Hand) has the power of God sealed in his right arm.

Azel (God Hand), the bearer of the other God Hand, is Gene's rival, whose actions caused him to be dubbed the Devil Hand.

Obelisk's (Yu-Gi-Oh!) God Hand Crusher lives up to its name. 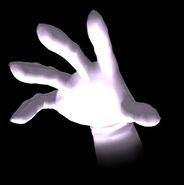 Master Hand (Super Smash Bros.) is a mysterious hand that acts as the god of the Smash Universe. 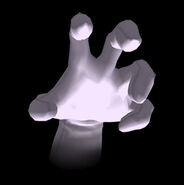 Crazy Hand (Super Smash Bros.) is the twin of Master Hand and a powerful force of destruction.

Mimihagi (Bleach) is the animate right hand of the Soul King and has several godly powers, most notably Stagnation.

Pernida Parnkgjas (Bleach) is the animate left hand of the Soul King and has several godly powers, most notably Evolution.

Infinity Gauntlet (Marvel Comics).
Add a photo to this gallery

One Minute Melee - Master Hand Vs Polygon Man (Smash Bros vs PlayStation All-Stars)
Add a photo to this gallery
Retrieved from "https://powerlisting.fandom.com/wiki/God_Hand?oldid=1692137"
Community content is available under CC-BY-SA unless otherwise noted.