The power to summon gods or godlike beings. Variation of Summoning. Opposite to Divine Banishment and Demon Summoning.

The user can summon gods/deities from other worlds to help them fight. 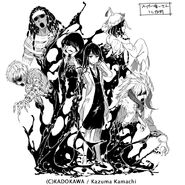 Minerva (Fairy Tail) can use the spell "Yagdo Rigora" to summon one of the 18 Gods of Yakuma.

Tarot (Tarot: Witch of the Black Rose) can summon The God and The Goddess of her wiccan faith.

Kagura (Valkyrie Crusade) is an exorcist capable of summoning the divine dog Koma as her trusty familiar.
Add a photo to this gallery
Retrieved from "https://powerlisting.fandom.com/wiki/God_Summoning?oldid=1397103"
Community content is available under CC-BY-SA unless otherwise noted.