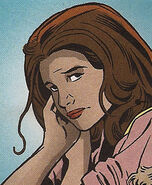 Airi (Kage Kara Mamoru) is so unimaginably rich that not only is a billion dollars considered to be mere pocket change to her, but her overall wealth increases many times due to various incidents happening that she had no part in and wasn't even present for.
Add a photo to this gallery
Retrieved from "https://powerlisting.fandom.com/wiki/Golden_Luck?oldid=1378494"
Community content is available under CC-BY-SA unless otherwise noted.