Inevitables (DnD) have the traits of golems due to them being "Divine Constructs".

Create Golems.
The power to create golems. Sub-power of Constructs Creation and Animation.

User is able to create golems: a magically animated being created entirely from inanimate matter. This power can be used with anything so user can have an army of super powered creatures at anytime and anywhere. Note that the exact power each golem has depends on the element(s) they were created from.

In Jewish folklore the golem is a statue made from clay and has the word "Emet" (truth or reality) on it somewhere (whether hanging from a sign on it's neck or written on its head). The word is incredibly important to the golem being the source of it's life, in one story removing the sign around the neck caused it to lose to crumble to dust. In the most famous story, the rabbi who gave it life rubbed the first letter off the forehead leaving the word "met" meaning dead, forcing it to sleep.

The most famous is the classical narrative of the Golem of Prague and Rabbi Judah Loew ben Bezalel. To protect the Jewish population from antisemitic feeling in the seventeenth century. And depending on the story the golem turned on the rabbi and went into a violent rage, or fell in love and when he was rejected he flew into a rage. Each story ends the same way, the rabbi stops the golem (using one of the methods above) and stored the golem in the attic of the synagogue.

King Vendrick (Dark Souls II) was able to create subservient golems using an unnamed magical artifact he stole from the Giants during his invasion of their homeland... 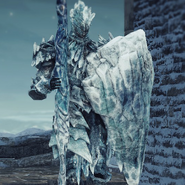 ...a technique that the Ivory King was able to replicate to create the Rampart Golems, Frozen Golems, and Ice Golems of Eleum Loyce.

Akatsuchi (Naruto) making a golem out of rock.

The Millennium Earl (D.Gray-man) has created a type of golem called "Teez"...

...which are used by Tyki to let the victims be eaten from inside out...

...as the number of these Teezes multiply, the strength of the advanced Teezes grows...

...and they become more dangerous to torment his victims and able to shoot dark matter blasts.

By channeling the power of Kun, the Forgotten King, Aya Blackpaw (Hearthstone: Heroes of Warcraft) can create powerful jade golems.

The Golden Tyrant (Seikon no Qwaser) using his Qwaser powers of gold... 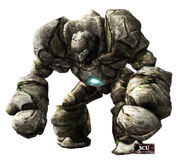 Kiyoshi Mitarai (YuYu Hakusho) creating golems out of water and his own blood.

The Golem of Prague and his creator Loew.

A golem in Jewish mythology.

A golem made of clay. 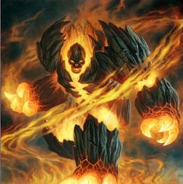 A fire golem.
Add a photo to this gallery
Retrieved from "https://powerlisting.fandom.com/wiki/Golem_Creation?oldid=1513253"
Community content is available under CC-BY-SA unless otherwise noted.