Use the traits of golems.
The ability to use the abilities of golems. Variation of Cryptid Physiology.

The user is or has the ability to take on the form of golems, an animated anthropomorphic being, created entirely from inanimate matter. They can be composed of a wide variety of materials such as clay, stone, minerals, wood, ice, water, or in the case of the Bone/Flesh Golem, corpses.

Traditionally golems were unable to speak, lacked a soul, and followed orders like an automaton. With no internal organs (or any organs for that matter) golems have no physical needs for sleep, food, or anything else that living things typically need for survival.

Golems can be made of several different materials:

An interpretation of a Stone Golem

The Filisnogos (Anima: Beyond Fantasy), it's a golem of divine powers created from ruins and powered by the souls of thousand of sylvains.

A Clay Golem (The Emperor and the Golem).

Karn (Magic: The Gathering) is a powerful Silver Golem 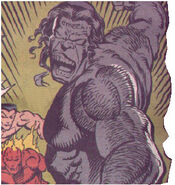 Capone Bege (One Piece) use his Shiro Shiro no Mi to transform himself into a fortress shaped golem.

Golden Tyrant/Judas Iscariot (Seikon no Qwaser) implanted his soul, along with his fellow Apostles,... 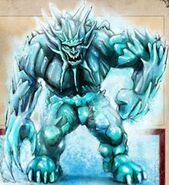 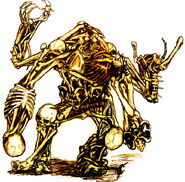 Bone Golem
Add a photo to this gallery
Retrieved from "https://powerlisting.fandom.com/wiki/Golem_Physiology?oldid=1439497"
Community content is available under CC-BY-SA unless otherwise noted.