The ability to possess great skills to grapple on to anything with grappling equipment or powers. Variation of Weapon Proficiency.

Users demonstrate skills with grappling on to anything with any kind of grappling equipment or powers. The user can use this power to grab on to anything that it grabs in order to climb up, down, across or swing. The user can even use this power on enemies or objects, to pull them over, swing them around and even use the grappling extensions to transmit electricity or other energies to damage or destroy the targets.

Mikasa Ackerman (Attack on Titan) using her 3D Maneuver Gear to latch onto a Titan's neck and reel in at high speed for a killing blow.

Batman (DC Comics) using his grappling lines for swinging through the cities.

Shijima (Ninja Scroll) can use his Demon Claw as a grappling hook. 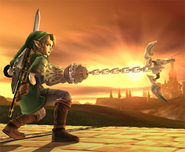 Link (The Legend of Zelda) using the Clawshot to grapple objects and building structures.

The Butcher's (Diablo) grappling hook reels in his enemy.

Smoky Quartz (Steven Universe) is able to use her yo-yo to grapple.

Spider-Man (Marvel Comics) use his Web Shooters for Grappling.

Sam Witwicky (Transformers) uses a Cybertron grappling hook against Starscream.
Add a photo to this gallery
Retrieved from "https://powerlisting.fandom.com/wiki/Grappling_Proficiency?oldid=1734240"
Community content is available under CC-BY-SA unless otherwise noted.