The Inagami (MHF G5) is a Elder Dragon capable of growing and weaponizing bamboo.

The ability to manipulate grass. Variation of Plant Manipulation.

Users can create, control, shape and manipulate grass, including the "true grasses" of the Poaceae/Gramineae family (cereals, bamboo, the grasses of lawns/turf and grassland), the sedges (Cyperaceae) and the rushes (Juncaceae, such as papyrus).

The user can cause grass growth, move/attack or even rise from the soil and "walk", mutate grass by rearranging DNA structure, and revive withered or dead grasses. 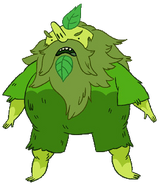 Charlotte Katakuri (One Piece) can generate, turn into and manipulate mochi thanks to the powers of the Mochi Mochi no Mi.

Grass-type Pokémon (Pokémon)
Add a photo to this gallery
Retrieved from "https://powerlisting.fandom.com/wiki/Grass_Manipulation?oldid=1503487"
Community content is available under CC-BY-SA unless otherwise noted.