Issho/Fujitora (One Piece) channeling his gravity manipulation ability through his sword, allowing him to cause massive damage when he unsheathes it.

Construct bladed weapons out of gravitons.

The ability to create bladed weapons of gravitons. Sub-power of Gravity Constructs. Variation of Blade Construction.

User can create gravitational bladed weapons, including daggers, swords, etc., from nothing or by shaping the existing gravitons, granting the blade tremendous offensive and defensive power from the increased weight or repulsive power. Because gravity can distort space and time, this allows intense gravity blades to slash through the continuum.

Victor Powered (Buso Renkin) wielding the Fatal Attraction battleaxe, creating gravity at opposite polarities with them to create a miniature black hole. 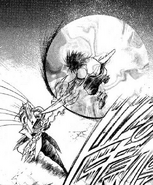 Joker (Flame of Recca) using his Taishaku Kaiten, an axe that control gravity and use its strongest ability to create black holes. 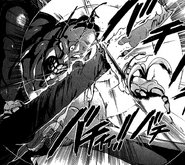 Kassim (Magi — The Labyrinth of Magic) using Gravity Sword, which creates a blade of tremendous repulsion power, capable of deflecting attacks with ease.

Chinmei (Samurai Deeper Kyo) firing off arc-shaped blades of gravity to cut through his targets.

Touta Konoe (UQ Holder) wielding the Gravity Blade, which can increase in its own weight to increase the damage inflicted proportionally.
Add a photo to this gallery
Retrieved from "https://powerlisting.fandom.com/wiki/Gravitational_Blade_Construction?oldid=1503490"
Community content is available under CC-BY-SA unless otherwise noted.