Sonic becomes the Violet Void (Sonic the Hedgehog) a singularity that draws everything into himself and vanish into a void within himself, destroying them.

The ability to create gravitational singularities. Sub-power of Gravity Manipulation.

User can create gravitational singularities, where matter is compressed to a point of zero size and space-time curvature is infinite. This usually creates a black hole, where the singularity is "cloaked" by an event horizon (the boundary where the escape velocity equals the speed of light).

Black holes produce a strong gravitational field that destroys and devours matter, with many offensive applications; however, rotating black holes have ring-shaped singularities, allowing some in-falling matter to pass through unharmed and emerge from a white hole in a different place, time, or universe.

Under some circumstances, singularities with extreme spin or charge can lose their event horizons, becoming "naked singularities" where quantum effects reign supreme.

Kakashi Hatake's (Naruto) using Kamui to cause the space that is reflected in his eye's focal point to collapse, and to be sucked into a singularity to another dimension.

Obito Uchiha (Naruto) using Kamui to create the focal point of a singularity in his right eye, sucking anything he is in physical contact with into another dimension.

Nagato/Pain (Naruto) forming the Chibaku Tensei, a singularity that draws in debris around it, which creates a planetary body. 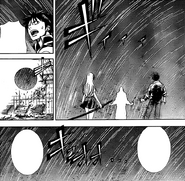 White Bomber (Bomberman 64: The Second Attack) detonating the Gravity Bomb, creating a deadly black hole of incredible gravity that sucks in all matter and light into the center singularity, destroying everything.

Ryu Hayabusa (Ninja Gaiden) using the Art of the Piercing Void, projecting a black hole that can heavily fluctuate space-time, devouring and piercing all that it passes.

Adept (Mass Effect) creating a Singularity through his biotic power, which sucks in all the enemies and holds them in place with a high gravity field.

Solaris (Sonic the Hedgehog) creating the Eye of Solaris, a space-time singularity that sucks in and destroys all matter.
Community content is available under CC-BY-SA unless otherwise noted.
Advertisement