Brago and Sherry (Zatch Bell!) use spells that generate different forms of gravity.

The user is able to generate graviton particles; possibly increasing the gravity in the area around them, which could have crushing affects on all in the area where gravity is generated.

Issho (One Piece) can generate immense gravitational forces, to the point of bringing down a meteor.

...to tear apart anything that gets too close. 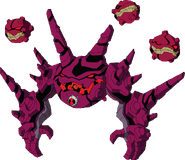 Graviton (Marvel Comics)
Add a photo to this gallery
Retrieved from "https://powerlisting.fandom.com/wiki/Gravity_Generation?oldid=1385069"
Community content is available under CC-BY-SA unless otherwise noted.