Use the traits of gremlin.
The power to use the abilities of gremlins. Variation of Cryptid Physiology.

User with this ability either is or can transform into a gremlin, a creature depicted commonly as mischievous and mechanically oriented, with a specific interest in aircraft. Their mischievous natures are similar to those of English folkloric imps, while their inclination to damage or dismantle machinery is more modern.

Gremlins are creatures who seem to live solely to infest mankind's machinery and tear it apart, either just to be mischievous (or downright evil), or in an insanely curious attempt to figure out how various devices work. Especially found around airfields or on airplanes, as they originated as a story told by British pilots starting in roughly the 1920's to explain various mechanical failures on their planes. They only began to penetrate mainstream culture during World War II, although the name may have been derived from an Olde English word, gremian, which means "to vex".

One possible precursor of the gremlin is the "sea gobelin", a solitary goblin from the Age of Sail nautical folklore. The gobelin would set up shop on a ship, start tangling ropes, scaring seamen and stealing their stuff. Of course, the folklore gobelin was usually used by less-than-innocent sailors as a scapegoat for their misgivings.

For such a commonly known beings, there is very little agreement what they actually are (possibilities include modern fairies and minor demons/imps) or what they look like, aside of generally humanoid appearance and smallish side. 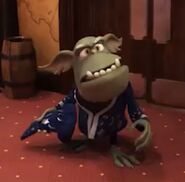 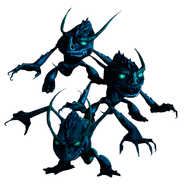 Big Boy and Runt (IDW's My Little Pony: Friendship is Magic), two cloud gremlins.
Add a photo to this gallery
Retrieved from "https://powerlisting.fandom.com/wiki/Gremlin_Physiology?oldid=1600754"
Community content is available under CC-BY-SA unless otherwise noted.