The user is able to liquefy any ground type (such as ice, rock, sand, lava, etc.). 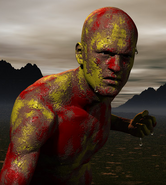 Due to the acidic venom that his body constantly exudes, Dioxin (The New Heroes) cannot even stand still in one place for long or the ground beneath his feet will begin to liquefy.

Daolon Wong's (Jackie Chan Adventures) favored technique for incapacitating foes is by softening the ground around them into a liquid and then hardening it. This can be done on any surface, including soil, stone or concrete.

Lucy Heartfilia (Fairy Tail) using Aqua Metra to liquify the earth to make it flow like the sea and waves.

Juzo Honenuki (My Hero Academia) can use his Quirk Softness to soften the ground so as to make it like quicksand and trap enemies.

Freddy Krueger (A Nightmare on Elm Street) liquifying the stairs beneath Nancy's feet to slow her down.
Add a photo to this gallery
Retrieved from "https://powerlisting.fandom.com/wiki/Ground_Liquification?oldid=1416760"
Community content is available under CC-BY-SA unless otherwise noted.