Magical Beast Transformation: Hekatonkheires (Akame ga Kill) can store massive artillery inside its body and regurgitate it when necessary.

Store things in the stomach.

"Just as you'd expect from him, he's puking stuff out of his mouth and just being plain creepy."
― White Zetsu on Orochimaru (Naruto)

The power to store things in the user's stomach. Variation of Body Storage.

The user can store beings/objects inside their guts and can regurgitate them out of their mouths at any time.

Dark Man/Mr. Dark (Fables) eats the teeth of his victims so that he could use them later for his magic. 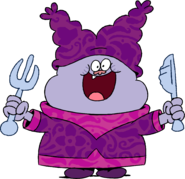 Hannah Anafeloz (Black Butler) is the Sheathe for the demon blade Lævateinn, and thus keeps it deep inside her for when it needs using

Doraemon (Doraemon) can store thousands of gadgets in his pocket stomach, be they small or large. 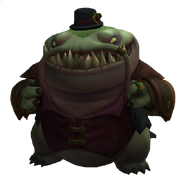 Tahm Kench (League of Legends) can store allied champions in his stomach to make them untargetable. 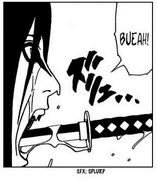 Orochimaru (Naruto) can store various objects such as swords inside his own guts.

Riou (Zatch Bell!) can hide his bookkeeper Banikis inside the mouth on his stomach to prevent his spellbook from being burned.
Add a photo to this gallery
Retrieved from "https://powerlisting.fandom.com/wiki/Gut_Storage?oldid=1540561"
Community content is available under CC-BY-SA unless otherwise noted.