The ability to utilize gravity manipulation in physical combat. Technique of Gravity Manipulation. Variation of Combat Merging and Fundamental Forces Combat. Opposite to Anti-Gravity Combat.

The user is able to utilize gravity manipulation with their physical combat, reducing or increasing the effective weight for their advantage (increasing the weight of the opponent or their weapons, decreasing their own), or changing the direction/magnitude of gravity.

Issho/Fujitora (One Piece) sends forth a blast of horizontal gravity,...

...allowing him to destroy large structures with ease. 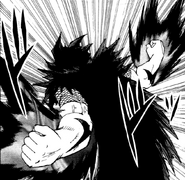 When Sherry casts Amu Gurunaguru, Brago (Zatch Bell!) enhances his arms with gravitational force.
Add a photo to this gallery
Retrieved from "https://powerlisting.fandom.com/wiki/Gyrokinetic_Combat?oldid=1752994"
Community content is available under CC-BY-SA unless otherwise noted.