Mirai Kuriyama (Kyoukai No Kanata) can manipulate blood shaping and solidifying it to form constructs such as blades.

The ability to create bladed weapons out of blood. Sub-power of Haemokinetic Constructs. Variation of Organic Blade Construction.

User can create blood weapons from nothing or by shaping the existing blood.

Liver (Akame Ga Kill!) using his Black Marlin's secret skill, Blades of Blood, firing off his blood that has been injected with a lethal poison for a very deadly final attack.

Byakuya Kuchiki (Bleach) using Senkei: Senbonzakura Kageyoshi, the true form of his Bankai which is created with his own blood mixed with the innumerable tiny blades to create thousands of compressed swords. 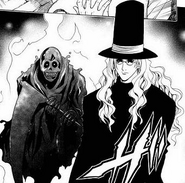 Charden Flamberg (Black Cat) using his Blood to create a reaper with a sharp scythe that can drain the victims upon cutting into them.

Saya Otonashi (Blood+) loads her blood into the groove of her special sword, which turns it into a blood sword deadly to Diva and her Chiropteran.

The Saint Fighters (Code:Breaker) using their Holy Blood ability to form blades out of blood.

Hiruko Shinten (Flame of Recca) hardening his blood to form a sword.

Issac McDougal (Full Metal Alchemist) using Water Alchemy to freeze his own blood as a last resort, creating a spear of solidified blood.

Kuroudō Akabane's (Get Backers) Bloody Sword can cleave through space and time, and is said that there is nothing it cannot cut.

InuYasha (InuYasha) using Blades of Blood to infuse his blood with demonic energy, turning them into razor sharp projectiles.

The Kubikiribōchō (Naruto) harvests iron from blood to repair any damage it suffered, technically making it a sword composed of blood. 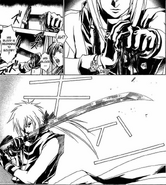 Shinrei (Samurai Deeper Kyo) crystallizing his liquid blood to form a sword.
Add a photo to this gallery
Retrieved from "https://powerlisting.fandom.com/wiki/Haemokinetic_Blade_Construction?oldid=1401443"
Community content is available under CC-BY-SA unless otherwise noted.