Use the traits of hags.

The power to use the abilities of hags. Variation of Mythic Physiology.

User with this ability either is or can transform into a hag, magical being in a form of wizened old woman. Hags are often seen as malevolent although not necessarily as wholly beneficent nor malevolent beings connected to the wild and destructive forces of nature. They are also wise and highly knowledgeable, especially about occult and arcane matters, and sought for advice.

Broadly speaking hags can be divided into two groups:

Mythical Hags are ancestral deities of wild natural forces like winter, guardians of barren lands and the shapers and creators of natural features, especially mountains.

Folkloric Hags are often lessened Mythical hags, cannibalistic beings that resemble bogeymen as they were used to frighten children into being good. 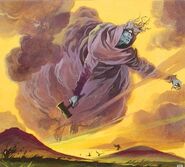 The Crones (The Witcher 3: Wild Hunt)
Add a photo to this gallery
Retrieved from "https://powerlisting.fandom.com/wiki/Hag_Physiology?oldid=1560380"
Community content is available under CC-BY-SA unless otherwise noted.