For as long as his hair remains uncut, Samson (Abrahamic Religions) is blessed with super-strength.

The power to gain strength from hair. Technique of Hair Manipulation. Variation of Organic Empowerment.

Users become stronger, faster, more durable, etc. when they come in contact with or are near the hair of oneself and/or others, possibly unlocking abilities related to the affinity and enhancing the existing powers. Some users may be able draw sustenance from the hair or even slow or stop aging.

The hair on the top of Donkey Kong's (Donkey Kong Country TV) is a source of his strength; should his hair his cut, his strength will be drained until it grows back. 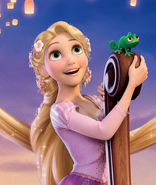 Rapunzel Corona (Tangled) possesses magic hair that heals injuries and retains youth. When it is cut, that magic dies.

Mother Gothel (Tangled) uses Rapunzel's magic hair to retain her youth, the effects of her magic dying when her hair is cut.

According to Pink Sheep (Minecraft), his powers all derive from his mustache, and fade when it is not well-trimmed.

Anodites (Ben 10) have magic hair meaning if it gets cut it can always regenerate back
Add a photo to this gallery
Retrieved from "https://powerlisting.fandom.com/wiki/Hair_Empowerment?oldid=1392902"
Community content is available under CC-BY-SA unless otherwise noted.