The user is able to project blasts/beams of energy/matter from their hands, being able to cause cutting, impaling, concussive, etc. damage. Depending on what the beam is composed, it can posses a variety of additional effects.

A Light Human, Admiral Borsalino/Kizaru (One Piece) can fire powerful photon laser beams from his fingertips. 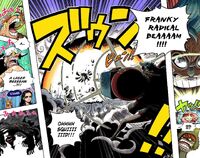 Hiei (Yu Yu Hakusho) using the Dragon of the Darkness Flame technique.
Add a photo to this gallery 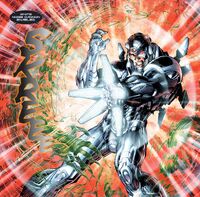 The Old Monk (Jackie Chan Adventures) was able to fire chi blasts after writing a symbol of the Scroll of Hung Chao on his palm.

Adam Brashear/Blue Marvel (Marvel Comics) can fire off powerful beams of energy from his hands. 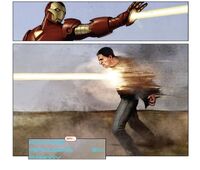 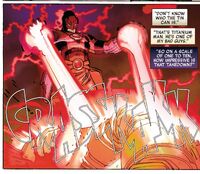 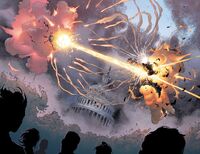 Castiel (Supernatural) smiting demons.
Add a photo to this gallery
Retrieved from "https://powerlisting.fandom.com/wiki/Hand_Blasts?oldid=1713966"
Community content is available under CC-BY-SA unless otherwise noted.