The headless horseman uses a pumpkin as a replacement head

Live without a head attached

Users can live without a head. A sub-power of Anatomical Liberation.

Users are able to live with body separated from head or are able to remove their head and replace it, either with their own head or with something else. 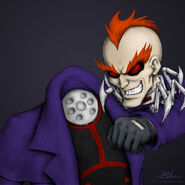 Hidan (Naruto) can survive decapitation, but, he is unable to move when his head is separated from his body.
Add a photo to this gallery
Retrieved from "https://powerlisting.fandom.com/wiki/Head_Liberation?oldid=484035"
Community content is available under CC-BY-SA unless otherwise noted.