The power to reattach the decapitated head of oneself and/or others. Variation of Limb Reattachment. Not to be confused with Head Regrowth.

Tenzen Yakushiji's (Basilisk) regenerative symbiote in the process of reattaching his head. 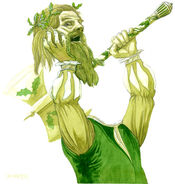 Hidan (Naruto), an immortal whose head was reattached by Kakuzu.

Leviathans (Supernatural) can reattach their heads after decapitation, if their heads are close in proximity to their bodies

Touta Konoe (UQ Holder) reattaching his head as he is an immortal vampire.
Add a photo to this gallery
Retrieved from "https://powerlisting.fandom.com/wiki/Head_Reattachment?oldid=1377195"
Community content is available under CC-BY-SA unless otherwise noted.