Tia and Megumi Ooumi's (Zatch Bell!) fifth spell Saifogeo, creates a floating sword that heals and restores the heart power of whomever it strikes.

Users can turn healing energy into tools, objects, weapons and other items, create semi-living constructs and/or create structures/buildings of varying permanence. Users who have mastered this ability can use it for almost any situation, creating anything they need.

The Cosmic Armor of Cosmo-Knights (Rifts) not only repairs any damage to itself, but it also heals any damage/harm done to its wearer. 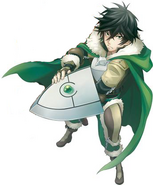 Naofumi Iwatani (Rising of the Shield Hero) has several different shields capable of restoring/replenishing his health.

As long as Genji Ikusabe (Buso Renkin) wields Gekisen, both he and the spear can regenerate even from being blown to bits.

Sesshōmaru (InuYasha) wields the Tenseiga, which allows him to see the pallbearers of the afterlife (and any other beings not of the world of the living) and slay them, reviving the recently deceased and healing their wounds.
Add a photo to this gallery
Retrieved from "https://powerlisting.fandom.com/wiki/Healing_Energy_Constructs?oldid=1489733"
Community content is available under CC-BY-SA unless otherwise noted.