After becoming purified from being a heartless, Sora (Kingdom Hearts) existed as a construct of his own heart without his body, his body taking the form of his Nobody Roxas.

Have the traits of a heart.

The power to have the traits of a heart. Technique of Cardiology Manipulation. Variation of Anatomical Physiology and Body Part Physiology. Opposite to Heartlessness.

User is an entity completely comprised of a heart, multiple hearts or recurring aspects of the cardiovascular system. This could count as a literal meaning, their physiology looking and behaving just like a regular heart, or this could be symbolic, their physical form a manifestation of their heart.

Ricardio (Adventure Time) is the Ice King's heart given consciousness.

The Idea of Evil (Berserk) is a dark manifestation of God that takes the form of a giant, malformed heart, drawing thoughts and feelings through it like blood.

Gerard Valkyrie (Bleach) is the Heart of the Soul King.

The Black Heart (Destiny) is a fragment of Darkness and serves a central importance to the Vex, who worship it as a god, even remaking themselves in its image. To protect itself, it summons the Sol Progeny by binding itself to them, bringing them to life.

After being blown to pieces, Jason Voorhees' heart (Friday the 13th) lived on in the form of a demonic parasite.

Originally a shooting star, Calcifer (Howl's Moving Castle) made a pact with Howl, Howl giving up his own heart and Calcifer becoming a fire-demon, Howl's heart being the center from which the flame emanates.

The Infant (InuYasha) is the embodiment of Naraku's demonic heart. 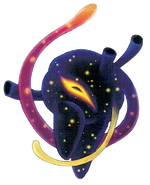 Hades' heart (Kid Icarus: Uprising) is a living being in and of itself.

Heartless (Kingdom Hearts series) are the physical manifestations of the darkness in people's hearts, mindlessly collecting more hearts to strengthen their numbers.

Ansem, Seeker of Darkness (Kingdom Hearts series) is the heartless of Terra-Xehanort.

Using his keyblade, Master Xehanort was able to cleave the dark half of Ventus' heart from his body, manifesting it as Vanitas. (Kingdom Hearts: Birth by Sleep)

SCP-058 - Heart of Darkness (SCP Foundation) is a disturbing and incredibly hostile bovine heart with spider legs, a scorpion’s tail, and tentacles.

Kardiak (Teen Titans) is a heart-like entity with a strange appetite for children.
Community content is available under CC-BY-SA unless otherwise noted.
Advertisement