"When you rip a guy's heart out, the blood inside stinks of hot iron and dead blossoms."
― James "Logan" Howlett/Wolverine (Marvel Comics)

The ability to rip out hearts. Sub-power of Cardiology Manipulation. Variation of Body Part Ripping.

User can remove the heart of oneself or others, usually resulting in the target's death. This may be done either by physical action (ripping the heart out manually via brute force) or by various supernatural means.

By normal biological means, tearing one's heart out means instant death. However, the heart may be continued to be connected to the body via a magical link, and anything that happens to it afterward will be afflicted to the owner's body.

See Also: And Show It to You. 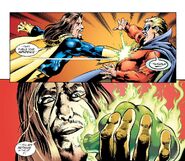 Lance (Undercover Brother) rips out a man's heart with his bare hand.

Regina (Once Upon A Time) rips out Snow's heart.

Rumplestiltskin (Once Upon a Time) rips out Tamara's heart.

Eric (True Blood) rips a heart out from a victim's chest. 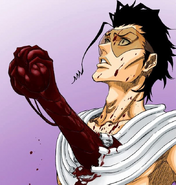 Charles Nelson Reilly (CNR) can rip out your beating heart and show it to you right before you die.

Tyki Mikk (D.Gray-man) phases through his victims to tear their hearts out without damaging their skin.

Naraku (InuYasha) removed Kagura's heart from her body, and threatened to crush it if she defies him.

Storm (Marvel Comics) rips out Marrows heart with her bare hands during their dual.

Kakuzu (Naruto) tearing hearts out of still living people to integrate them into himself.

Trafalgar D. Water Law's (One Piece) Mes technique can remove a victim's heart without killing them.

Snake Jailbird (The Simpsons) possessing Homer and ripping out Moe's heart with a corkscrew.

Shaolin monks (The Simpsons) tearing out Homer's heart with their martial arts before putting it back in, keeping him alive.

Doviculus (Brütal Legend) about to rip out Drowned Ophelia's heart from her back with his bare-hand.

The Warlock (The Warlock's Hairy Heart) removed his heart from his own body via dark magic to negate emotions, and later actually tore out the Maiden's and his own heart via brute force.

Shinichi Izumi (Parasyte) is strong enough to rip the heart out of a Parasite.

Using his magic Snatch, Ban (Nanatsu no Taizai) can rip out his target's heart.

Vampirella (Vampirella) plunging her fist into her half-brother Drago, the First Nosferatu's chest...

...and ripping out his heart to eat it. 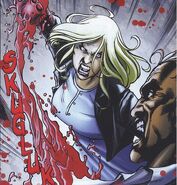 The Blood Red Queen of Hearts (Vampirella) ripping a man's heart out.

Raziel (Legacy of Kain) has torn the Heart of Darkness from Kain's chest.
Add a photo to this gallery 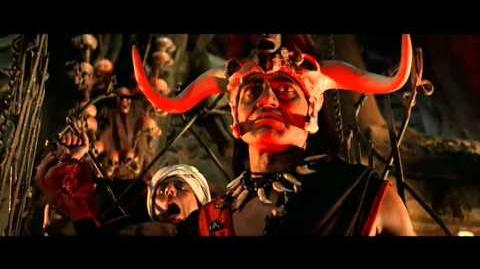 Temple of Doom's heart removal scene-1
Mola Ram (Indiana Jones and the Temple of Doom) famous scene of ripping out hearts.
Add a photo to this gallery
Retrieved from "https://powerlisting.fandom.com/wiki/Heart_Rip?oldid=1513322"
Community content is available under CC-BY-SA unless otherwise noted.