Organization XIII (Kingdom Hearts series), like all nobodies, have no hearts.

Live without a heart.

"Missed!... Did you forget? I'm a heartless wretch!"
― Davy Jones (Pirates of the Caribbean)

The power to live as a being with no heart. Opposite to Heart Entity Physiology. Not to be confused with Dead Heart.

Users have literally no heart, being able to live without the cardiovascular organ in their bodies. This may also affect the user in a conceptual way of "heartlessness" as well; becoming callous and/or sociopathic.

Hollows (Bleach) are souls who lost their hearts (signified by a gaping hole mainly on their chest), becoming soul-eating beings who act so in an attempt to fill the void.

Arrancars (Bleach) are Hollows who have regained part of their humanity and reasoning. However, their lack of a heart is still evident by the gaping hole somewhere on their bodies.

Because of the cursed tool Ginstrnag's Love, Kirika Ueno's (CubexCursedxCurious) heart no longer beats or functions, and yet she still remains alive so long as she doesn't remove the cursed tool.

Howl (Howl's Moving Castle) makes a deal with a shooting star. Howl gives up his heart to save the life of that shooting star, leaving Howl heartless and turning that star into the fire demon Calcifer. 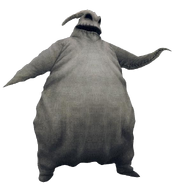 Being a construct of bugs tied together in a burlap bag, Oogie Boogie (Kingdom Hearts) is heartless by the metaphysical standards of Kingdom Hearts, forcing him to steal an artificial heart made by Dr. Finkelstein in order to take control of a number of Heartless.

Dr. Finkelstein's Experiment (Kingdom Hearts series) was created without a heart, stealing Christmas presents from Santa's workshop in an effort to fill the void.

Xayide (The Neverending Story II: The Next Chapter) is the living embodiment of emptiness in Fantasia, and thus she has no heart. When Bastion used his last wish to give her a heart, she ultimately destroyed herself in response.

In order to numb herself to love and thinking only about gaining power, Cora (Once Upon a Time) used her own dark magic to remove her own heart.

Sheriff Graham/The Huntsman (Once Upon a Time) had his heart magically removed by Regina, enslaving him to her will. 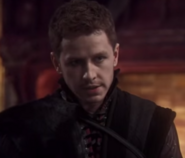 Within Isaac's "Heroes and Villains" storybook, David Nolan/Prince Charming (Once Upon a Time) is given the role the Huntsman had, acting as Snow White's unwilling slave via his removed heart.

Will Scarlet (Once Upon a Time in Wonderland) had his heart removed by Cora because he could not accept the heartbreak of his girlfriend's betrayal.

Tin Woodsman (Oz series), when his flesh-body was replaced with tin, was built without a heart, though this has not impeded his capacity to feel.

Davy Jones (Pirates of the Caribbean series), after feeling his love meant nothing, he literally cut out his own heart and locked it away in a chest, becoming nearly immortal.

William Turner Jr. (Pirates of the Caribbean series), after stabbing Davy Jone's heart, had his heart removed and became captain of the Flying Dutchman, until his son Henry Turner and his friend Jack Sparrow destroyed the Trident of Poseidon, lifting his curse.

The Warlock (The Warlock's Hairy Heart) removed his heart from his own body via dark magic to prevent himself from feeling emotions, specifically love.

Golem (Valkyrie Crusade) is a heartless genocidal doll, and is a monster born from heretical power.

Iron Maiden (Valkyrie Crusade) is an automaton designed to kill, and has no heart or soul. 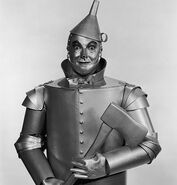 Tin Man (The Wizard of Oz)

The world has made Obito Uchiha (Naruto) a being who can live without a heart.

Kū (Naruto) was one of the five Fabrications who were created without a heart, thus he survived when Mitsuki stabbed him in the chest, though this flaw also made his lifespan unstably short, until he implanted an artificial heart into himself.

Mytho (Princess Tutu) shattered his own heart in order to seal the Raven away.

Prince Brandish (Fables) had his own heart magically removed from his body, effectively making him unkillable.

Naraku (InuYasha) removed his heart several times to allow himself to become closer to immortality and demonic, but each time he reabsorbed it to make use of the humanity for his goals.
Community content is available under CC-BY-SA unless otherwise noted.