The ability to generate from within oneself heat and release them from the mouth. Sub-power of Heat Attacks. Variation of Fire Breath. Opposite of Ice Breath.

The user is able to generate and manipulate heat within them in a way that allows them to shape the exhaling of the effect. These shapes can include bursts, streams, spheres, lasers, and even a mist of it from the mouth.

Rodan (Godzilla) breathes out beams of heat from its mouth.

Sally Owens (Practical Magic) lights a candle with her breath.

The Thunder Twins, Max and Phoebe Thunderman (The Thundermans) can both breathe waves of pure heat from their breathes to undo their Freeze Breaths or project fire/heat projectiles from their mouths. 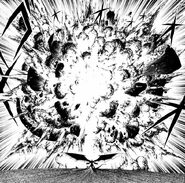 After Ashuron transferred his power to Zatch's (Zatch Bell!) Golden Spellbook, Zatch gained the spell Shin Doragonosu Buroa, enabling him to fire a huge blast of condensed heat from his mouth.
Add a photo to this gallery
Retrieved from "https://powerlisting.fandom.com/wiki/Heat_Breath?oldid=1718537"
Community content is available under CC-BY-SA unless otherwise noted.