Palutena (Kid Icarus), Goddess of Light, Protector of Humanity and Ruler of Skyland.

Have authority over all Heaven.

The power to hold domain in heaven, the paradise afterlife. Variation of Afterlife Lordship. Opposite to Hell Lordship. Not to be confused with Utopia Lordship.

The user has authority and duty in heaven a place where deities and angels come together as well as the souls of heroes, and good people in perfect peace and joy. Users are able to command the deities, angels and have godlike powers in Heaven. 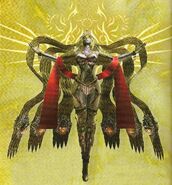 The Moon King (Kubo and the Two Strings) was ruler of the Heavens and all that live there.

Santa Christ (Channel Awesome) is able to control the form Heaven takes through mental focus, choosing for it to manifest as a soundstage.

After declaring himself "God", Castiel (Supernatural) briefly took over Heaven.
Add a photo to this gallery
Retrieved from "https://powerlisting.fandom.com/wiki/Heaven_Lordship?oldid=1390848"
Community content is available under CC-BY-SA unless otherwise noted.