Monkey D. Luffy (One Piece) dealing a heavy blow to Kaido with his Gum Gum/Gomu Gomu no Elephant Gun.

Use super-strong momentum to hit targets with tremendous force.

"Let's see you keep up that talk, Gyou'Un!! If you really think these blows of mine are as light as you think them to be!!"
― Ri Shin (Kingdom)

The power to enhance physical attacks by moving and gaining momentum. Technique of Enhanced/Supernatural/Absolute Strength.

User is able to increase the effects of their strikes by moving and gaining momentum.

With his titanic strength and years of wielding heavy, oversized swords, Guts (Berserk) demonstrates his herculean striking power whenever he swings his slabsword, Dragon Slayer.

Sosuke Aizen (Bleach) applied tremendous force in his swordsmanship, allowing him to destroy Shikai and Bankai of powerful Shinigami with great ease.

With his strength, Monkey D. Luffy (One Piece) isn't known to pull his punches like when he sent a World Noble flying with a regular punch...

...frequently applies it through his techniques like the Gum Gum/Gomu Gomu Bazooka.

Ri Shin's (Kingdom) strength allows him to deliver powerful and heavy strikes against his opponents like when he sent Rin Ko of the Four Heavenly Kings and his horse reeling...

...and Kaine flying while she blocked his strike...

...and has only grown stronger while wielding General Ou Ki's Podao.

With strength of over 100 men, Ren Pa (Kingdom) can deliver heavy and powerful blows against his opponents...

...creating a crater in his attempt of killing Ri Shin.

Kou Yoku of the Thunder (Kingdom) lives up to his nickname quite well.

Ba Tei (Kingdom) delivers a heavy blow against Ri Shin, smashing not only him but the bark off a tree in the process. 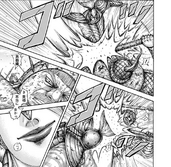 The Sentry (Marvel Comics) sends Ares, the God of War flying with a simple punch.

Jack Hawksmoor (WildStorm/DC Comics)
Add a photo to this gallery

Death (Darksiders) can use a variety of weapons to cause heavy attacks.

Terra's (Kingdom Hearts) fighting style is heavily dependent on brute strength, using slowly but very heavy and hard-hitting attacks to decimate his enemies.
Add a photo to this gallery
Retrieved from "https://powerlisting.fandom.com/wiki/Heavy_Strike?oldid=1694328"
Community content is available under CC-BY-SA unless otherwise noted.