The power to exhale hell-fire and release it in various forms from the mouth. Sub-power of Hell-Fire Manipulation. Variation of Fire Breath. Opposite to Demonic Ice Breath.

The user is able to manipulate energy that can manifest as hell-fire in their lungs in a way that allows them to shape the exhaling of hell-fire. These shapes can include bursts, streams, spheres, or a cloud of it from the mouth.

Atlas Flame (Fairy Tail) breathing dark fire of such intensity that he considers it equivalent to the flames of hell.

Guardian ÄRM, Wakan Tanka (Marchen Awakens Romance) is able to breathe the flames from the land of hell. Alan is the only one who has been able to survive the dark flames and counterattack. 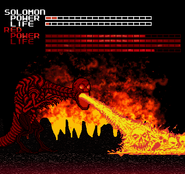 Red (NES Godzilla Creepypasta) attacking Solomon with a massive blast of hell-fire from his mouth.
Add a photo to this gallery
Retrieved from "https://powerlisting.fandom.com/wiki/Hell-Fire_Breath?oldid=1356513"
Community content is available under CC-BY-SA unless otherwise noted.