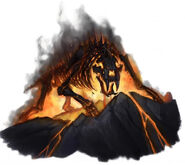 Entei, one of the Legendary Beasts, is a lion-like Pokemon that has fire-based abilities nearing volcanic levels.

Flash Leopard is a panther type Bit Beast with fire and invisiblity based powers and belongs to the Beyblader known as Ozuma, leader of the Saint Shields.
Community content is available under CC-BY-SA unless otherwise noted.
FandomShop Newsletter Join Fan Lab