Entei (Pokemon), one of the Legendary Beasts, is a lion-like Pokemon that has fire-based abilities nearing volcanic levels. 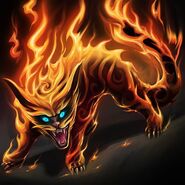 A Hellcat summoning (Vampire Wars)
Add a photo to this gallery
Retrieved from "https://powerlisting.fandom.com/wiki/Hellcat_Physiology?oldid=783046"
Community content is available under CC-BY-SA unless otherwise noted.