Use the traits of a vampiric monster.

The power to take on the traits of a vampiric monster. Variation of Monster Physiology.

Users of this ability are either a member of a vampiric monster type or can mimic them. These kinds of creatures vary wildly from region to region but share the common trait of feeding on human and/or animal blood - often in fiction this can extend to other sapient races.

Hematophagic Monsters overlap with Anthrophagist Monsters but the key difference is that Hematophagic (as their name suggests) are primarily blood-suckers and while some of them also devour meat they are not exclusively cannibalistic in nature.

Cultures across the world have imagined all manner of vampiric monsters, many of which are very alien and disturbing - while the Western world often views vampiric beings as undead this is not the case for all of them and indeed many famous examples (such as the chupacabra) are considered very much living creatures.

While not applicable to all of the many vampiric monsters a great many of them are also linked to sickness and death, often seen as tormenting the sick and dying as a kind of supernatural scavenger - thus while many of them are cunning predators even more of them exist as opportunist thieves and a great many traditions have been created across the world to try and protect the vulnerable, who are seen as favored target for such beings.

By default, much like the anthropophagist monsters, they are not remotely malevolent, as they only feed for survival's sake. 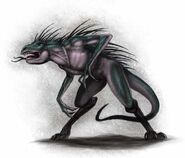 Chupacabra (South American Folklore) is a blood-sucking alien and/or monster. 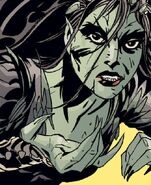 Redcaps (Scottish Folklore) are murderous goblins that must dip their caps in fresh blood to stay alive.

Papinijuwari (Australian folklore) are demonic giants that drink the blood of the sick and dying.

Chordeva (Indian folklore) are shape-shifting witches with vampire traits.
Add a photo to this gallery
Retrieved from "https://powerlisting.fandom.com/wiki/Hematophagic_Monster_Physiology?oldid=1690614"
Community content is available under CC-BY-SA unless otherwise noted.