"I am the hope of the universe. I am the answer to all living things that cry out for peace. I am protector of the innocent. I am the light in the darkness. I am truth. Ally to good! Nightmare to you!"
― Goku (Dragon Ball Z)

The power to be the embodiment of heroism. Variation of Power Manifestation

Users of this power embody everything it means to be a hero or heroic. They are dauntless in character and pillars of strength and valor. They will seek to uphold justice without every succumbing to the dark desires that path can often bring forth. User may reach this level if as a normal being their heroics were noticed by a God/Gods or a universal force and as such were gifted with this power. Often times it is impossible for a user of this power to lose do to heavy plot armor or author favoritism which when translated in the fictional verse can mean protection from an omnipotent being

The Uni-Power (Marvel) is an aspect of the Enigma Force and a manifestation of the Universe itself. It is the potential for heroism that resides in all of us. When the Uni-Power chooses a partner that person becomes Captain Universe.

Goku (Dragon Ball Series) has saved the world many times over and is an embodiment of heroism. 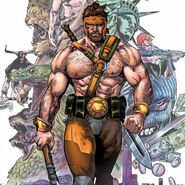 Hercules's amazing strength and great deeds over the years has given him the title God of Heroes.

Talos (Elder Scrolls) is the hero God of Mankind and the God of righteous rule.
Add a photo to this gallery
Retrieved from "https://powerlisting.fandom.com/wiki/Heroism_Embodiment?oldid=844850"
Community content is available under CC-BY-SA unless otherwise noted.