Yog-Sothoth (The Cthulhu Mythos) Lurker at the Threshold, Opener of the Way, is beyond all spatial dimensions.

Be beyond spatial dimensions.

"You don't perceive our true appearance. Your existence and ours are different. My form, and what you think you are seeing, are not necessarily the same."
― Mokkurkalfi (Ah! My Goddess)

User with this ability either is or can transform into a higher-dimensional abomination. The user thus transcends three-dimensional space, with all of the benefits gained from that. The result is a truly terrifying being to lesser dimensional beings.

Eaters (Digimon) are a race of hive-minded abominations from beyond the human or digital worlds. All that can be theorized, even by Yggdrasil, is that they came from a "Higher Dimension".

Mother Eater (Digimon), the core of the Eater Hive Mind, even managed to assimilate Yggdrasil, eventually forcing reality to be reset to 8 years prior, before the Eaters first appeared. 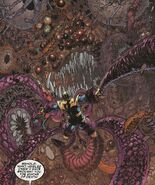 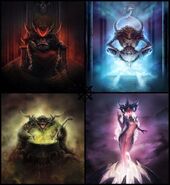 Chaos Gods (Warhammer Fantasy/Age Of Sigmar/40000) are powerful entities who inhabit/control the Immaterium/the Warp, a psychic dimension that underlies all physical reality.
Português do Brasil
Community content is available under CC-BY-SA unless otherwise noted.
Advertisement