The power to combine solid light and technology. Combination of Light Manipulation and Technological Constructs. Photokinetic variation of Advanced Technology.

User can combine technology with solidified light to increase interactive range around oneself.

The Lantern Corps (DC Comics) all use technology in order to simulate and utilize hardlight as a complex piece of technology. 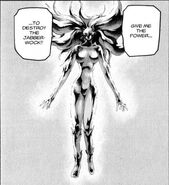 Once a renoun physicist who specialized in light manipulating technology, Living Laser (Marvel Comics) started physically integrating his work into his body to become a being of pure light energy.

Mysterio (Marvel Comics)
Add a photo to this gallery
Retrieved from "https://powerlisting.fandom.com/wiki/Holo-Technology?oldid=1513356"
Community content is available under CC-BY-SA unless otherwise noted.