The power to infuse holy fire into objects, beings, or powers. Sub-power of Holy Fire Attacks. Variation of Fire Infusion.

The user can infuse objects (usually a weapon), beings or powers with holy fire, empowering and energizing them and allowing the user to manipulate their qualities and efficiency.

Emi Yusa (The Devil is a Part-Timer!) infuses her sword with holy fire to attack Lucifer.

By way of his fusion with Zarathos, a Spirit of Justice, Johnny Blaze/Ghost Rider (Ghost Rider: Spirit of Vengeance) can replace his hellfire abilities with blue, angelic flames.

After being infused with the three Sacred Flames, the Goddess Sword (The Legend of Zelda) becomes the Master Sword. 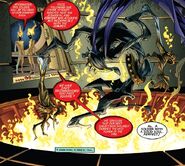 A host chosen by the angels (Spawn) is infused with holy fire, turning him into a Redeemer.
Add a photo to this gallery
Retrieved from "https://powerlisting.fandom.com/wiki/Holy_Fire_Infusion?oldid=1424796"
Community content is available under CC-BY-SA unless otherwise noted.