Use the traits of Hone-onna.

The power to use the abilities of Hone-onna. Variation of Yokai Physiology.

User with this ability either is or can transform into a Hone-onna (bone woman), a female yokai who, depending on the version, either kills men by extracting their lifeforce or by grabbing their hands and holding them until the victim becomes a skeleton himself, or manifests herself as a skeletal woman. They can appear as human and usually appear as beautiful, but very skinny lady carrying a red lantern in shape of a peony flower and visit men in attempt to sleep with them. 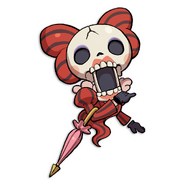 Dazzabel (Yo-kai Watch)
Add a photo to this gallery
Retrieved from "https://powerlisting.fandom.com/wiki/Hone-Onna_Physiology?oldid=1503798"
Community content is available under CC-BY-SA unless otherwise noted.