Crocodile (One Piece) is highly formidable in hand-to-hand combat, often using his hook with his physical prowess and Suna Suna no Mi abilities. The hook also possesses a poisonous hook underneath and a retractable blade.

Possess great skill with a hook

The power to possess great skill in wielding a hook. Variation of Weapon Proficiency.

Users have an incredible aptitude for the ways of the hook. They are able to wield hook with great proficiency in brute power and close quarter combat. When it comes to wielding different weapons, the hooks can even paralyze the enemies with piercings.

Sly Cooper (Sly Cooper) a master thief who uses a special hook cane that's been in the family for generations. 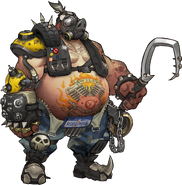 Pudge (Defense of the Ancients)

Urashiki Ōtsutsuki (Naruto/Boruto: Naruto Next Generations) main weapon is a Fishing Rod that has a hook at the edge of it which he is able to manipulate it such as homing attacks...

...and his hook can steal others chakra leaving them weakened.
Add a photo to this gallery
Retrieved from "https://powerlisting.fandom.com/wiki/Hook_Proficiency?oldid=1380424"
Community content is available under CC-BY-SA unless otherwise noted.