Adara (DC Comics) the Entity of Hope, is the physical embodiment of hope.

Become the embodiment of hope.

"I am anti-life, the Beast of Judgement. I am the dark at the end of everything. The end of universes, gods, worlds … of everything. And what will you be then, Dreamlord?"
"I am Hope."
― Choronzon and Dream, playing "the oldest game", in Sandman #4: "A Hope in Hell"

"Until that time, you must light the darkness. You must make the night less empty. We are all small, and the universe is vast. But a universe filled with voices saying "I am here" is far greater than a universe silent. One voice is small, but the difference between zero and one is as great as one and infinity. And when your time is passing, please send this message on, so the next voice can speak against the darkness."
― SCP-1281/Harbinger's Message (SCP Foundation)

"Yeah, well, the reason he doesn't is Barry's real superpower isn't speed. It's hope. Kid's got an endless reservoir. Believes everything's gonna work out."
― H.R. Wells on the Flash (The Flash (2014))

The power to become the embodiment of hope. Variation of Emotional Energy Manipulation, Emotion Embodiment, and Hope Manipulation. Opposite to Despair Embodiment.

Users become the living physical manifestations or personifications of hope and gain the ability to feed on the hope of everyone and everything including themselves. Users can convert hope into energy and use it as a full source to extend their own life span or as a weapon. Users may never age and may be immune to death unless certain conditions are met.

Takeru "T.K." Takaishi and Patamon and it's Evolutions (Digimon Series) are also known as the embodiment of hope.

Hope (Fables), Embodiment of Hope and one of the Great Powers. 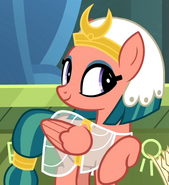 Bunnymund (Rise of the Guardians) the Easter bunny and Guardian of Easter. His centre is hope.

Jake English (Homestuck), Page of Hope.
Add a photo to this gallery
Retrieved from "https://powerlisting.fandom.com/wiki/Hope_Embodiment?oldid=1669213"
Community content is available under CC-BY-SA unless otherwise noted.