The power to have horns on one's body. Variation of Natural Weaponry.

The user either has or can generate horns on their head or body, which can be used offensively.

Grunbeld, The Great Flame Dragon (Berserk) in his Apostle form.

Hellboy (Hellboy/BPRD) normally keeps his horns filed down to stumps.

The Deadly Six (Sonic the Hedgehog) all have at least one horn.

Diclonii such as Lucy (Elfen Lied) have horns that resemble cat ears. 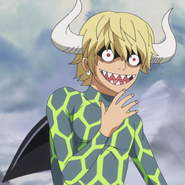 Usually hiding behind a hat, Dellinger (One Piece) displays his Fighting Fish horns.

Fused with the body of the Ghost ÄRM, Hydra, Chimera (Marchen Awakens Romance) was able to push her vile transformation even further and grow a horn.

When Kapellmeister (Marchen Awakens Romance) became a demon, he also grew a pair of horns. 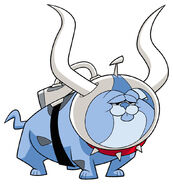 Lord Tirek (My Little Pony Series)
Add a photo to this gallery
Retrieved from "https://powerlisting.fandom.com/wiki/Horn_Protrusion?oldid=1418082"
Community content is available under CC-BY-SA unless otherwise noted.