Cassie Hack (Hack/Slash) is the quintessential final girl, as she has made it her life mission to slay the killers of the world after she was traumatized by a Slasher.

"You know, I was just a job. I was just Joe Mechanic. Then my wife got possessed...went nuts on me. I stabbed her, that didn't stop her. Next thing I knew, this guy comes busting in. Soaks her with holy water and sends that demon straight to hell so fast. I'd have gone away for killing her. But Rufus cleaned up everything. Taught me a thing or two...about what's really out there."
― Bobby Singer to Sam and Dean Winchester on Rufus Turner (Supernatural)
The ability to survive and fight back against horrific encounters. A counterpart to Slasher Villain Physiology.

As a Horror Survivor, the user is driven to survive and kill the monster or killer that threatens their lives by any means and thus, has unlocked strengths and skills that have laid dormant within them and gives them the edge over their supernatural attacker. 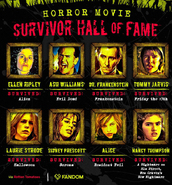 Ellen Ripley (Alien series) is famed for surviving and even self-sacrificed herself against the Xenomorph threats and incredible terrors.

Guts (Berserk) survived a truly hellish encounter greatly horrific and traumatic that it...

... created a personification born from Guts' darker emotions and traumatic experiences called The Beast of Darkness a mental creature that...

... Guts can manifest through his Berserker Armor to become a greater monster and draw strength from his inner demons.

Buffy Summers (Buffy the Vampire Slayer) survived many horrors in her universe and overcame them all.

Riddick (The Chronicles of Riddick) has survived and overcome many monstrous extraterrestrial entities and through such experiences, he thrived on has made him a very feared man throughout the galaxy.

Ash Williams (Evil Dead series) is one of the most well-known examples.

New Kid (South Park: The Fractured But Whole) using the powers of the final girl.

Isaac Clarke (Dead Space series) faced horrifying undead monsters throughout his mission to save humanity while maintaining his nerve to the point where his fear kept him vigilant and aware.

Sebastian Castellanos (The Evil Within series) has faced incredibly terrifying creatures and was always able to overcome every obstacle that came his way.

Chris Washington (GET OUT)

Having survived horrors throughout his life, Dean Winchester's (Supernatural) experiences have allowed him to overcome all forms of supernatural monsters, murderous ghosts, demons, gods, and even the Devil himself.

Takahata Shun (As The God of Death Dictates/Kamisama no Iutoori)
Add a photo to this gallery
Retrieved from "https://powerlisting.fandom.com/wiki/Horror_Survivor?oldid=1560260"
Community content is available under CC-BY-SA unless otherwise noted.