Take on a human appearance.

The power to take on a human appearance. Not to be confused with Humanization or Human Physiology.

The user can take on an ordinary human appearance to blend in with modern society. This power is designed for non-human individuals to hide their non-human traits and appearances to avoid detection.

Using Transformation Magic, Carla (Fairy Tail) is able to assume a human form, albeit retaining her cat ears and tail. 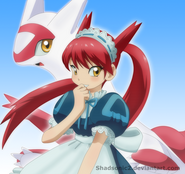 Latias (Pokémon) in her human form.

Being a mermaid herself, Lucia, (Mermaid Melody) gains a human form when she's on dry land.

Hippo (Mermaid Melody) has 3 forms, his human form, his penguin form and... 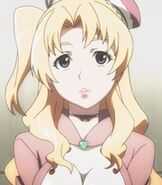 Mamitas (Space Dandy), as a Deathgerian, can take on the appearance of a young woman to attract prey.

A Slitheen unmasking (Doctor Who)

Virasians (Gamera vs Viras) in their human forms.

What Soul Eater (Valkyrie Crusade) actually is is a complete mystery, she decides to appear with a female humanoid form.

To hide his true mamodo appearance from public, Rein (Zatch Bell!) has the ability to disguise himself as a human.

Chocolina (Final Fantasy) is a chocobo granted the power to assume human form by Etro.

As vampires, Drusilla and Darla (Buffy the Vampire Slayer/Angel) can freely shift between a human face and a vampire face.

Thanks to Puck's magic, Demona (Gargoyles) becomes a human during the day rather than entering stone sleep.

...such as when he disguised himself as the monk Phillipe Augustine to take control of the Inquisition chapter of Amiens...

...and the antique collector Paul Augustine to trick Edwin Lindsey into helping him find the Essence of Mantorok in Cambodian. 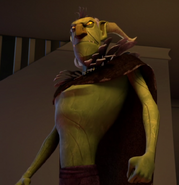 Like all the changeling, Stricklander (trollhunters) is able to choose between him human and troll form
Add a photo to this gallery
Retrieved from "https://powerlisting.fandom.com/wiki/Human_Disguise?oldid=1329436"
Community content is available under CC-BY-SA unless otherwise noted.