Use the powers and traits of a hunting deity.

The power to use the powers and traits of a hunting deity. Variation of Transcendent Physiology.

User with this ability either is or can transform into a hunting deity, a god or goddess in mythology associated with the hunting of animals and the skills and equipment involved. They are a common feature of polytheistic religions. 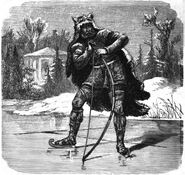 Erastil (Pathfinder)
Add a photo to this gallery
Retrieved from "https://powerlisting.fandom.com/wiki/Hunting_Deity_Physiology?oldid=1408249"
Community content is available under CC-BY-SA unless otherwise noted.